Have the Best Sex … for Pregnancy

When it comes to starting a family, you and your partner probably want to make everything right to hit the jackpot. For most couples, it’s often easy, but for others, unfortunately, it can take several months – maybe even years before the baby wish is fulfilled.

Fertility problems are very common and affect about 10% to 15% of couples trying to conceive. A study in Denmark from 2012 with over 4000 men, it concluded that approximately 15% of the men in the trial had a sperm quality so low that they would have a high risk of needing fertility treatment to father a child, and another 27% of the men would have a prolonged time to pregnancy [1].

Therefore, a bit of planning to have the best and when doesn’t hurt.

There are many factors that may impact a couple’s ability to conceive and one of these may be incorrect timing of sex– or having too little sex to actually hit the woman’s fertile period. Timing is critical when you’re trying to conceive.

Many of us got the impression in school that sex any time can get you pregnant. This isn’t entirely true. Conception is only possible from approximately 5 days before and up to several hours after ovulation. This means that there are only a few days in a whole month where you can hit the right timing and it is, therefore, important to know when these days are if you are not already having sex several times per week. Many women believe that they are ovulating when they are actually not, and this can prolong the process of conceiving.

However, knowing the female fertility window might be a bit difficult. There are many “ovulation prediction kits” and other methods that women can use for guidance to timed sex – some methods are more reliable than others.

How to predict ovulation?

In 2015 a big study was published where the purpose was to assess the beneﬁts and risks of ovulation prediction methods for timed sex with couples trying to conceive. The conclusion was that timed sex may improve pregnancy rates compared to sex without ovulation prediction, but the data was not strong enough to support this conclusion completely.[2]

Having too little sex means that your chances of hitting the right timing are low. Having too much sex, multiple times a day or even every single day could cause “burnout” where one or both partners may not be interested, resulting in a missed opportunity. Another bad thing of too much focus on sex and baby making is that sex becomes a chore and could cause unneeded stress.

With all the above said, our conclusion and advice is to have sex approximately every other or third day, paying special attention to the few days before and during ovulation. Remember that there is nothing wrong in having regular sex – in fact, it keeps the sperm production stimulated and the sperm cells fresh for fertilization.

Sperm quality is important for chances of getting pregnant, and most important is how many moving and healthy sperm cells there are in a semen sample. This parameter can be affected by many different factors such as lifestyle and environmental toxins. Although it has also been suggested that ejaculatory frequency might also affect semen quality [3].

In a 2016 study with 43 male participants, it was shown that ejaculates obtained after 2h of abstinence had lower volumes, sperm concentration, total sperm and total motile sperm counts but higher percentages of progressively motile sperm when compared with samples obtained after 4–7days of abstinence. This indicates that sperm stored for too long may take damage that reduces the motility. Another study showed that it takes approximately 3 days to gain a full load of sperm.

Ideally, you would, therefore, space ejaculations with at least 24 hours, but still, maintain frequent ejaculations (3 times per week) to maintain production of new sperm cells. But if you feel like having sex several times a day during her ovulation, we think you should go for it, since no current literature suggest that this should harm your chances of getting pregnant!

Well, for the male part the orgasm is most often associated with ejaculation, so it is very important that the male gets his sperm deposited in the female’s reproductive tract. For the women, on the other hand, there is no existing scientific evidence showing that the female orgasm can improve pregnancy rates.

Many couples assume that lubricants do not influence the chance of conceiving. But even though they do not necessarily contain spermicidal agents they may be detrimental to sperm quality when they come in contact with sperm. Lubricants can impact sperm motility, DNA fragmentation, and their ability to survive. Therefore, finding a safe lubricant may benefit your chances of conceiving.

How does semen quality and chance of reaching pregnancy correlate? We have designed a Semen Quality Score system for you to get an idea about 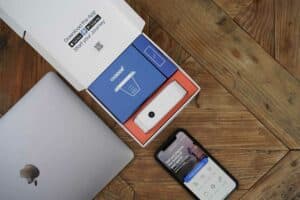 The benefits of at home sperm testing

It’ll come as no surprise that we are huge fans of at-home sperm testing. It’s quick, simple, puts you in the driving seat and is

"5 ways to improve your sperm quality"